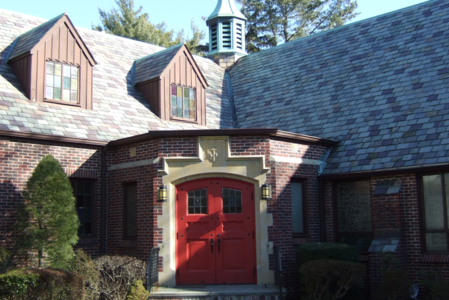 Pastor Helmke served the church from 1971 until accepting another calling in 1996. 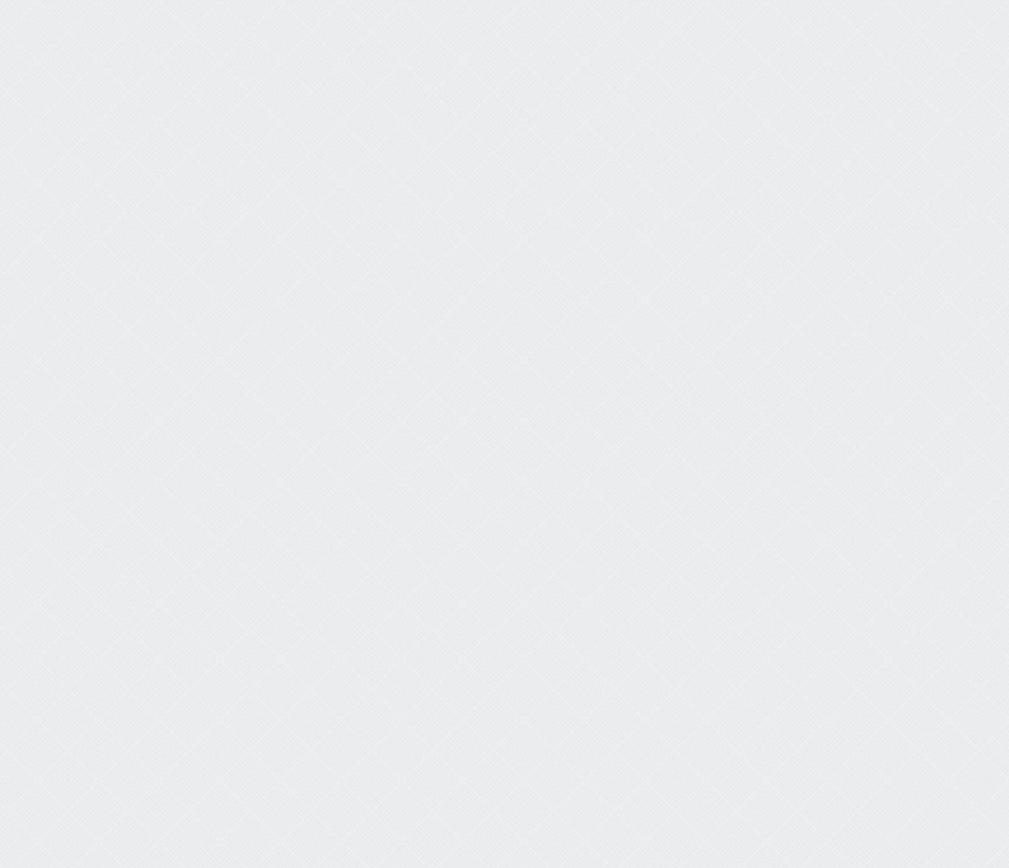 Pastor Dietrich served the church from 1956 until his retirement in 1971.

Pastor Morecraft served the church from its opening in 1927 until his death in 1955. 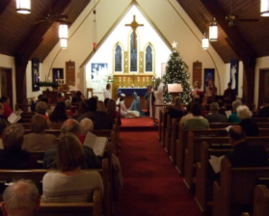 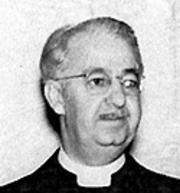 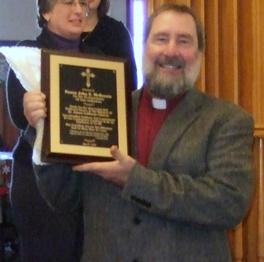 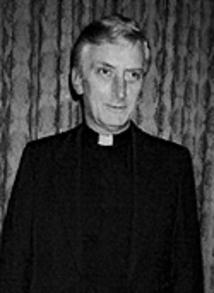 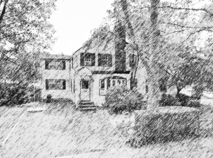 Pastor McKenzie has served the church since 1996 and continues to serve today. 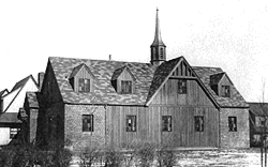 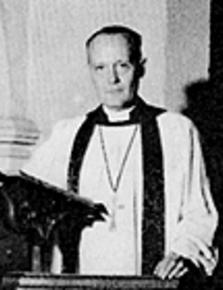 St. James Lutheran Community Church held its first service on Ash Wednesday, March 2, 1927, in a home at 62 Salisbury Avenue, with twelve people in attendance. Sunday's service was moved to 56 Salisbury Avenue. Mr. James Graham of Realty Associates provided this unoccupied home for temporary worship. In 1933, Stewart Manor changed the street names and addresses and 56 Salisbury Avenue became 22 Salisbury Avenue. Pastor Morecraft resided in the upstairs portion of this 22 Salisbury Avenue home and services were held downstairs. The garage housed the first Stewart Manor Fire Department truck and the alarm, which was an old iron hoop and hammer, was in the front yard. In 1946, the church purchased this home for $4,400.00 which they sold in 1963.

During this first year, a Sunday School and Ladies Guild were established and the church baptized its first member, Ernest George Hoelle, on October 2, 1927. On October 31, 1927, the congregation was organized under the direction of the Rev. Carl Zinsmeister, DD, Missionary Supt. of the New York Synod. A call was issued and Rev. Edward I. Morecraft became the first pastor of St. James Lutheran Community Church. His yearly salary was $1,800.00 plus $700.00 for expenses.

Membership continued to grow with the forming of the church Sunday School, Ladies Guild and a Men's Club. St. James had their first wedding on January 28, 1928 when Anna Lehman married Jack Schwartz of Manhattan. The Sunday School started with five children and by 1928 they had twenty-six. They encouraged attendance with a pin system and had a yearly picnic/beach party in Sea Cliff. The Ladies' Guild had regular cake sales and bridge parties. They also had theater and leap year parties. Their events brought additional funding into the church treasury. However, the activity that made the papers was the Men's Club outing on June 28 (through the 29th), 1928. It started off as a dinner at Peck's on the waterfront in Baldwin. After dinner, the group of thirty cars continued on to Coney Island. It was reported that they returned home in the "wee" hours of the morning. God was truly watching over their journey as they all returned home safely to their families.

In January 1929, St. James Lutheran Church had an agreement with Realty Associates in Brooklyn, NY to purchase twelve lots (200’ x 120’) for $8700. This property was located on Chester Avenue between 5th Street and 6th Street. In 1933, 5th Street became Elton Road and 6th Street became Fernwood Terrace. Although the property wasn’t actually purchased until several years later, building plans had been drawn up and contributions were being made to a building fund.

From early on, the history books indicated the church had a choir. Ten of the twenty-five church members in attendance for the first Christmas service, December 25, 1927, sang in the choir. There were years when the church had an adult and junior choir (boys and girls) and there were times when the church had no choir. However, music always rang out from St. James Lutheran Community Church. December 24, 1931 the choir, assisted by many of the young folks, went caroling in Stewart Manor. They all piled on an ice wagon with the pump organ and organist and drove from one end of the Manor to another singing Christmas songs. The first mention of purchasing an organ came December 13, 1932 when it was recorded that the Ladies Guild decided to assist the choir in paying for the new organ they purchased for $250.00 with a down payment of $100.00. This organ was replaced with an Estey Organ – new two manual electro-pneumatic – walnut A.C. motor for our new church building in 1941 for $1,185.00. In 1990, the organ that provides us with our music today, was purchased with the $22,000.00 the church collected through fund raising efforts.

The parsonage at 22 Salisbury Avenue was becoming increasingly inadequate to accommodate the continued growth of this newly formed church. On May 20, 1931, the Ladies Guild voted that the Council should go ahead with the plans for the new church building. May 24, 1939, the first parcel of property (120’ x 120’) was actually purchased from Realty Associates for the sum of $2,800.00. This property was on Chester Avenue and Elton Road.

Steffens & Gustafson, architects from Richmond Hill, were paid $2,000.00 for a new set of plans and to supervise the building of our new church. A contract for $13,165.00 was signed with builder George H. Schwartz of Rockville Centre, NY for construction of our first building.  Our original plan was for asphalt shingles, which we changed to ¼” slate shingles  for the added cost of $475.00.​ ​

On July 23, 1939, there was a groundbreaking celebration for this first unit of the church and the laying of the cornerstone took place on October 15, 1939. The new building (where we now hold our coffee hours) was dedicated on January 21, 1940.

This new building left room for expansion to accommodate continued growth of the church. October 1, 1950, the second parcel of property (80’ x 120’), on Chester Avenue and Fernwood Terrace was purchased from Realty Associates for $1,500.00. August 24, 1952 there was another groundbreaking celebration in preparation for the second part of the church, which would cost $51,585.00.  The laying of the cornerstone for this addition took place March 15, 1953, and the new church was dedicated on May 10, 1953, allowing the first section to be utilized as a parish hall and this new section to hold the worship services. The altar, lectern, communion rail and chancel chairs, which we still enjoy to this day, were hand carved by Mr. Hans Eckardt.

After serving his Lord and the Church for twenty-seven years, Pastor Morecraft was called to his eternal home on April 18, 1955. Although he had been ill, this was a great shock to the congregation. Rev. Carl Toebke conducted the services until another Pastor could be called upon to serve the St. James congregation. This call came on February 1, 1956 with the arrival of Rev. George E. Dietrich from Redeemer Lutheran Church in Syracuse, NY.

The church continued to grow under the leadership of Pastor Dietrich and soon it became necessary to think about adding to the parish hall and to build a new parsonage. The addition of the parish hall (where pre-school is now held) cost $78,000.00 to build and the parsonage was completed at the cost of $33,000.00. Both the parish hall and the new parsonage were dedicated on September 8, 1963. The structures did not change; however, landscaping, stained glass windows and other improvements were made through the years to all of the church structures.

In June of 1971, Pastor Dietrich retired from active ministry and relocated to Florida. The final mortgage of the church was burned in January 1972 and February 1, 1972 Rev. Ernest W. Helmke came to us from another church and began his ministry at St. James. Pastor Helmke sang with the choir every Sunday and held regular confirmation classes. He had two services every Sunday with a Bible Class that met in-between these two services. St. James had a monthly coffee hour held after the 11:00 a.m. service on the first Sunday of every month during this time. Pastor Helmke conducted many outreach sessions in the community as he walked through the neighborhood on his way to the stores. We often found Pastor Helmke greeting the church neighbors as he was serving as part of a general maintenance crew for St. James, tending to the church gardening, plumbing, snow removal and other maintenance chores.  In addition to these ministries, Pastor Helmke also served as the chaplain for  the Stewart Manor Volunteer Fire Department during his tenure with us. In 1996 he accepted another calling at Redeemer Lutheran Church in Hicksville and in September of 1996, we accepted the shared ministry services of The Rev. John Shepherd McKenzie aka Pastor John.

​Pastor John S. McKenzie has certainly written a new chapter for St. James. He serves us in a shared ministry position with Advent Evangelical Lutheran Church in Elmont and after two years, accepted the position as interim without terminus. Neither church has come to realize that Pastor John is not with them full time since he has done such a wonderful job tending to the needs of both congregations. He immediately got people involved as lay readers and the volunteer ushers involved in serving communion. Then he instituted communion every Sunday, along with weekly coffee hours following our one 9:00 a.m. service. He got a small Sunday School program started with onevolunteer and then involved children of various ages that led to a pre-school Sunday School program and the involvement of additional volunteers.  He organized a pre-school program at the church during week-days for three and four year olds that proved to be very successful and has now expanded that to a two-year old program. Vacation Bible School during the summer was another one of his ideas that he instituted with volunteers that was repeated yearly based upon popular demand. The church has life and activities going almost daily.

The new buildings of 1940, 1953 and 1963 had provided many years of service and had now become older buildings. These structures have received some desperately needed repairs, updates and face lifts within the last several years under the guidance of Pastor John. We continue to be the only church within the Stewart Manor Community serving the Stewart Manor and surrounding neighborhoods. With the leadership of Pastor John and God's Blessings, we have again experienced a growth in activities, membership and attendance.

On this, our 89th year, we have approximately sixty active members within St. James. Our “youth” group from five years ago, consisting of forty and fifty-year-olds, has been replaced with a real youth group of children that have given us a Sunday School consisting of approximately ten children. In addition to our weekly services and coffee hours, our church membership has enjoyed yearly activities such as a St. Patrick’s Day luncheon, “souper suppers” prior to our Lenten services and a spring Strawberry Festival. We start off the fall with a September potluck supper, Oktoberfest dinner and dance, a fall fair and end the calendar year with a Christmas Carol Service followed with soup and sandwiches. In addition to these activities, we remind the Stewart Manor Community of our presence with our participation in their Memorial Day parade and their community street fair. We support the surrounding communities with our food drives for Lutheran Community Services, our toy drive for needy tots at Christmas and our blanket and school supply drive for the families at Belmont Race Track.​  We are truly grateful for God's many blessings bestowed upon St. James. In eighty-five years of service to the community, we have had only four ministers. They have been dedicated ministers that helped guide us and see us through some good times and some difficult times.

As we celebrate more than 85 years of service, we pray for the continued support of the community, dedicated leadership, strength of the church membership and God's Blessings.